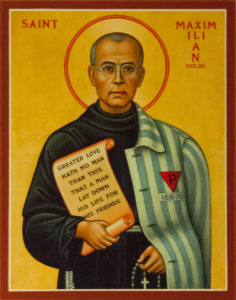 Young Raymund Kolbe grew up in Poland with a passionate desire: to be a soldier a defend his beloved homeland from all invaders. His boyish bravado manifested itself in mischievous behavior that cause his mother to ask him what ever would become of him. The question perplexed and occupied the young boy so that he poured his little heart out to Our Lady of Czestochowa. The Blessed Virgin appeared to Raymund one day and offered him a future. She presented to Kolbe two crowns: white for purity or red for martyrdom. Our Lady asked which he wished to have and with all of the gumption of a soldier Raymund said he would take both. Thus, the future of Kolbe had begun as a passionate soldier of the Immaculata, the Virgin Mother of God. Instead of the uniform of a Polish infantryman, Kolbe would don the Franciscan habit as a Conventual Friar and take the name Maximilian dedicating his life to promoting consecration to Jesus Christ through the Immaculata in both Europe and Japan. The Nazi Gestapo, foiled often by St. Maximilian, would finally arrest him in February 1941 and sent him to the infamous prison at Auschwitz. After having lived a life of great purity under the guidance of Our Lady, St. Maximilian was not prepared to receive the red crown of martyrdom. After suffering terrible mistreatment as a prisoner under the Nazi’s, St. Maximilian displayed the ultimate sacrificial love. A fellow prisoner was sentenced for execution along with none others as reprisal for the escape of another man. Franciszek Gajowniczek was a Polish Army Sergeant with a family and he cried out in fear of what would happen to his family were he to die. St. Maximilian stepped forward and requested to take his place. St. Maximilian and 9 other men faced the torture of a starvation bunker. Kolbe ministered to the men and had them singing hymns to God. Finally after weeks of hunger and dehydration, St. Maximilian was killed by injection with acid. Like his master Jesus Christ, Kolbe loved till the end.

Get the latest news, information on what’s happening at the Chapel and spiritual reflections.