During the last 20 years of the 18th century in the Piedmont region of northwest Italy, a number of mysterious events began to take place. Frequently, upon entering Catholic bookshops to purchase books, priests would find a packet of selected books waiting for them and already paid for. During missions to the people of the provinces and cities alike, Catholic missionaries would find sent to them thousands of catechisms and other books of devotion, all to be given out free of charge. Again, in theaters, cafes, inns, and churches, one would find numerous booklets, leaflets, and small catechisms waiting for those who would take them. 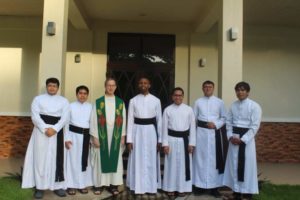 When Pope Pius VII was captured by Napoleon, documents needed by the Holy Father to continue his leadership of the Church mysteriously reached him despite the watchful eyes of Napoleon’s police. Whenever newspapers announced events of special importance for Catholics, whether of government interference with churches or convents, or the publication of bad literature, without fail there would appear various leaflets and pamphlets, all circulating in order to inform, encourage, and alert the faithful. The poor, the sick, and the imprisoned would find before them lay apostles, young seminarians and elderly priests, bringing them comfort and aid of every kind.

The organizer of these activities, the guiding spirit behind these events, was known only to a very few. He was a tall, thin man with a wide forehead, lively eyes, and a nose like an eagle’s beak. In his frail body, there dwelt the heart and soul of a wise organizer and an invincible spirit. He came from Cuneo, and his name was Bruno Lanteri.

Bruno had been raised in a strong atmosphere of faith, but his childhood was also touched by deep sorrow. Losing his mother when he was only four years old, he developed a strong love for Mary. Bruno’s attraction to silence and seclusion prompted him to enter the Carthusians at the age of 17. Due to his health, his monastic life lasted only a week. After this experience, he pursued the diocesan priesthood.

While studying in Turin as a seminarian, Bruno met Father Nicholas von Diessbach, a Jesuit priest who would have a profound influence on him. Under Diessbach’s spiritual guidance, Bruno developed a great love for the Holy Father and faithfulness to Church teaching. In 1781, at the age of twenty-two, Bruno was ordained a deacon. The next year he was ordained to the priesthood at the chapel of the Immaculate Conception of Mary in Turin.

For the next thirty years, Father Lanteri served the Church in Northern Italy. It was an unstable time both in secular society and in the Church. The anti-Christian spirit of the French Revolution was rampant. The Jansenist heresy obscured the truth of God’s love, while other ideologies undermined the authority of the Pope. Under Father Diessbach, Lanteri underwent a retreat based on the Spiritual Exercises of St. Ignatius and had a profound experience of the infinite mercy of God. He became an ardent witness to God’s mercy through intense and varied works.

Central to the work of Father Lanteri was his collaboration with certain groups called the Amicizie Cristiana (Christian Friendships) and the Amicizie Sacerdotale (Priestly Friendships) founded by Father Diessbach. The Amicizie were something new to the times. They were groups of lay people and priests committed to a serious spiritual life, and to making an impact on the culture by circulating Catholic books. Lanteri guided and accompanied these groups for no less than thirty years. With good reason, Lanteri was named “Precursor of Catholic Action” by Pope John XXIII, and declared Venerable by Pope Paul VI for his heroic virtue.

Foundation of the Oblates of the Virgin Mary

In 1814, Lanteri met several zealous priests who were starting an apostolic work in Carignano. Very intent on reviving a Church that had been badly damaged by Napoleon, these three, nevertheless, needed some guidance. When they looked to Lanteri for help, he shared with them his own apostolic and spiritual experience, particularly that of the Spiritual Exercises of St. Ignatius. Father Lanteri entrusted the group to the Virgin Mary, whom he always called their main foundress and teacher.

The Oblates of the Virgin Mary received papal approval from Pope Leo XII in September 1826. Later in the 19th century they came to Asia for the first time, undertaking the evangelization of Burma (Myanmar). They would also spread to eight other foreign countries. In 1976, exactly 150 years after receiving papal approval, the Oblates came to Boston, U.S.A. Since then, they have expanded in America with foundations in Colorado, Illinois, and California. In 1997, Oblate priests from America arrived in Cebu, Philippines.

Join our Facebook community for news and updates on our ministry and brothers.