These words of the founder, Venerable Pio Bruno Lanteri (1759-1830), capture the spirit and mission of the Oblates of the Virgin Mary. Father Lanteri lived in northern Italy in a time of great moral confusion and spiritual discouragement. He formed the Oblates to be both contemplatives and apostles, men of study, prayer, and compassionate pastors. Today, serving in nine countries around the world, the Oblates bring hope for a new beginning.  This hope springs from five key attributes essential to Oblate Spirituality:  Mercy, Mary, Fidelity, Discernment, and Zeal for souls in today’s world. 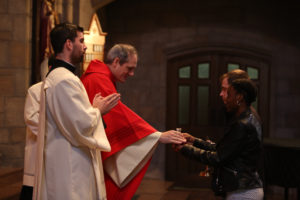 The Oblates, whose name means “offering,” are a group of priests and brothers founded early in 1816 by the Venerable Fr. Pio Bruno Lanteri.  Ven. Lanteri, a priest from Northern Italy, always insisted that the Virgin Mary is the Foundress of the Congregation.  Having lost his own mother at the age of four, he used to say with a heartfelt love:  “I have known no mother than Mary most holy, and throughout my life I have received nothing but caresses from such a good mother.”  In like manner, all Oblates look to her with devotion as a model in the imitation of Jesus, and a sign of hope to all believers.

Learn More About Our Mission

The ministries of the Oblates include spiritual direction, guided retreats, virtual workshops, providing the sacraments, publishing, preaching and teaching as well as working with the poor and needy.

Read About the Oblate Spirituality

As important as the Oblates’ works themselves is the spirit with which they carry them out.  An Oblate is not a man at war with the world, but on fire with the love of God.  This expresses itself in an Oblate’s love for preaching and the sacraments, especially the sacraments of Eucharist and Reconciliation.  Ven. Lanteri taught the Oblates to examine attentively the “signs of the times,” in order to guide men and women to find the answers they seek in Christ.

Called by the Holy Spirit to seek God alone, the Oblates unite themselves more closely to Christ by vows of chastity, poverty and obedience. In every action, they always have Jesus Christ before their eyes as companion and model who said, “I am the Way, the Truth and the Life; no one comes to the Father but through me.”  An Oblate serves the People of God with generosity, amiability, and patience, hoping to manifest, even in the smallest way, the infinite goodness and mercy of God.

Get to Know Our Seminarians 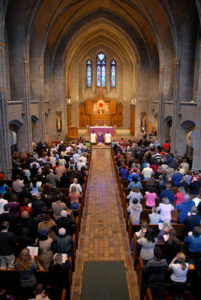 Since their arrival in the United States in 1976, the Oblates have continued to attract new members and establish new foundations. In addition to offering retreats across the globe, they serve in retreat centers, parishes, seminaries, and shrines in the archdioceses of Boston, Los Angeles, and Denver, and in the diocese of Springfield, Illinois and Venice, Florida.