This article began as a response to a discussion that recurs every year around this time… the debate over the orthodoxy or heterodoxy of the popular song Mary, Did You Know?. I figured I would weigh in on this song that I have come to love.

Here is a spectacular performance of it:

Several objections are raised each year, about how much Mary needed to know to give her assent when the archangel Gabriel brought her the news: that she, a lowly virgin, betrothed, would conceive a son by the overshadowing of the Holy Spirit and the power of the Most High, would name that son Jesus, and he would save the world (cf. Luke 1:31-35). Everyone says, “Of course, she knew! How dare you suggest that she didn’t!” 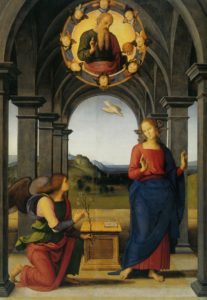 Now, I answer objections based on a position that the song does not intend to teach dogmatically but rather ask questions that come from a standpoint of awe and wonder. The fear of God is not of punishment. It shows how disarmed we are before the full truth about our creator. We have never been asked as big a faith question as Mary was, at her age, in her circumstances. The song does not ask “Didn’t you know that your son was God,” as if the prosecution were to rest its case having exposed that she did NOT. It asks the incredulous (that is, literally, un-believing) question that we would ask – I can’t believe my ears/eyes – is this really God? The answer is YES. He is God. She knew. But the song only works if you take this devotional perspective, which I do.

There is an historical “problem.” A line of the song goes like this: “The baby you delivered will soon deliver you.” The challenge is that this denies the Immaculate Conception.

Here again, we have to gain a perspective that the poetry tolerates and that scholastic theology actually supports. You have to see it from God’s view of time (which is the instantaneous grasp of all of time; whereas we see time as past, present, and future: unfolding). And then you have to see the way we live history. Having heard the whole story, we go back and tell Mary, in poetic turns of phrase, that the baby she delivered will soon deliver her. It’s TRUE because her immaculate conception was merited by his death on the cross. No other way was possible. The blood and water flowing from Jesus’ side as He emptied out the fullness of his humanity is precisely what washed her from sin before it could touch her. And so the merit of Jesus’ sacrifice, applied to Mary’s soul by the God who stands outside of time, had not yet been accomplished in time. And we CAN sing about it that way, because it is mystery.

Having said all of that, I do maintain the reservation that it ought not be sung at Mass, much less performed by a soloist at Mass. That is not keeping with sacred orientation toward God, even as we are aware of the presence of the worshiping community of believers in the pews around us. But I think a fuller appreciation of the theology I outlined above goes a long way for our own prayer and reflection.

Going out a little further on a theological limb, there is an open question what exactly Jesus’ human mind knew about His mission or identity as God. And because it’s open (as in: no magisterial pronouncement about what He did or did not know in his humanity), I do not care to debate it here. There are a handful of obvious things that it would be just plain inconsistent for him not to have known. The hard question is if Jesus’ human mind could not comprehend all of God’s omniscient knowledge, then what did He leave out? Or what did he accept to not know at each given moment? But the implication for this song is that if Jesus’ human mind did not know some things, how much less for Mary to know about such a grand and mysterious plan??? Perhaps in a similar way, she also came to know what she needed to know at each moment of the unfolding of that grand plan of God, taking place in her life, in the fullness of time (Gal. 4:4).

For us, our reflection and motivation rests in Mary’s fiat, her response to the angel: “Let it be done unto me according to your word” (Luke 1:38). It is her commitment in trust to the yet-to-be-fully-revealed plan of almighty God, who looked upon the lowliness of His handmaid and brought forth for us a savior, the Word made Flesh and the splendor of the Father, a little baby we can hold and who reaches out to embrace us, even now.

For those of you who are interested in other songs that are written with this same poetic awe, check out Joseph’s Lullaby, and Joseph’s Song.

This book is a hopeful invitation to all who struggle to overcome the greatest obstacle in spiritual life: discouragement.