The Lanteri Center opened on October 4, 2004, but the history begins when Fr. Ernest Sherstone, OMV visited Denver and was inspired by the Spirit and to establish a spiritual direction center here. He was then the director of the Ignatian Centre in Montreal, Canada, but when God called him to Denver he said “yes.” Fr. Ernie is a kindly sage who brought a lifetime of experience and humble leadership. He is a true student of St. Ignatius of Loyola and has the ability to accompany people from all walks of life and bring out the best in them.

Fr. Dan Barron, OMV, agreed to help with the new apostolate and brought gifts of counsel, vision, IT, and teaching, and drew many excellent people to the Center. He helped connect the Center with other organizations across the country, such as the Institute for Priestly Formation. With Fr. Ernie, he laid the foundation for an ecumenical center open to Christians from different backgrounds – the only requirement was a serious desire to follow Christ.

Next, in 2005, came Al Starkey, a married layman who had left his corporate career to become a spiritual director. His years of experience in developing national and international programs and a keen understanding of the field of psychology were invaluable in the development of the Center’s formation programs.

No one who knew the Center in the early days can forget Ruthie Rogers, the first secretary and bookkeeper. Ruthie did all the administrative work, which allowed our priests and staff to concentrate on spiritual direction and the new training programs. Her work in establishing the Center and keeping it going was invaluable. This work was continued by Lou Ann Doran, who not only kept everything organized and running smoothly but also became a loving face and welcoming spirit at the Center.

Fr. Greg Cleveland, OMV, came in 2006 when Fr. Dan was transferred to Boston. Fr. Greg has the gifts of teaching, preaching, writing, and encouragement, plus the ability to reach out in friendship and draw other people in. You can find him on the golf course and ski slopes as well as hard at work behind the desk or pulpit. He is a man of all trades and talents, and the Center continues to be guided by his good hands. 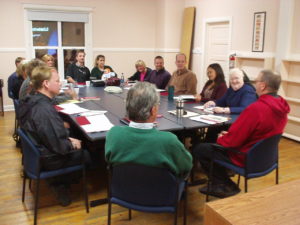 Next came the ladies: first Bonnie Vanni, who brought her gifts of healing prayer and a wise, listening heart, then Lee McDowell, who had already spent decades forming disciples of the Lord and helping them grow spiritually. Lee also brought years of experience as a counselor, and contributed all these talents to her work as a spiritual director and teacher. Kay Davis shares from 20 years experience living a monastic life in the desert, and Catherine Hubka, the first graduate of both the Center’s training programs, contributes her charism of guiding souls to Christ.

Throughout its history, the Lanteri Center has been blessed with many volunteers who have contributed to mailings, parties, launching new programs, supervision, and so much more. The missioning of many students from the Prayer Partnering and Spiritual Direction training programs is also a blessing.

October 2019 marked the 15th anniversary of the founding of the Lanteri Center. Current and former staff members, volunteers, graduates, and benefactors gathered for fellowship and to offer thanks to God for the gift that the Lanteri Center has been in so many lives.

Join one of our spiritual direction training programs to begin helping fellow Christians along their spiritual journeys.