On August 15, 2020, our brother, Deacon Paul Kallal, OMV,  will complete his priestly ordination with the Oblates of the Virgin Mary after years of formation as a seminarian. But his path to the priesthood began long before he first visited St. Clement’s or encountered the Oblates at St. Mary’s Church in Alton, Illinois.

Listen to his story in three parts, including his childhood and family experiences, dedication to his career and hobbies as a young adult, and his experience hearing and answering God’s call to join our community.

Like other young men in the process of discerning their vocation, Deacon Paul was in his mid-20s and dedicated to his career by the time he started seriously listening to the idea of the priesthood. At this point, he has worked as an intensive care nurse for several years—and he was also conflicted about another important area of his life at the time: bodybuilding competitions.

Hear how he navigated the growing desire to become a priest with the other commitments that brought him joy.

“[A] new happiness, a new desire, a new fulfillment had overtaken my life. The desire, the thought, the idea, the hope of fulfillment in the priesthood. And that was greater than any desire that being a bodybuilder, or being a nurse, or any other earthly happiness could give me at that time in life.”

Seminarians often get questions like, “When did you hear Jesus calling you to the priesthood?” or “When did you receive your calling?” In this video, Deacon Paul talks about growing up in the Catholic Church and instances where he heard God calling him, including his time as an altar server and a Cursillo retreat weekend. He also describes two experiences while working as a nurse where he strongly felt God’s invitation to the priesthood.

Deacon Paul’s first encounter with the Oblates was during visits to St. Mary’s Church in Alton, IL, the same church his ordination ceremony will take place at this August. He was struck by their smiles, happiness and the seriousness in which they took Mass. In this video, Deacon Paul describes the importance of choosing the Oblates of the Virgin Mary as a religious community and how the life of a seminarian, including the teachings of OMV founder Venerable Bruno Lanteri, influenced his priestly formation.

“It was like being in focus and looking at a painting. Sometimes you can’t see the painting clearly because you’re too close to it or too far away. But at some point, you get to that perfect distance where everything is focused in and all those small details of the painting become clear. You see what the artist is trying to paint. That’s what it was like for me in my seven years as a seminarian. Starting to see what God saw. Starting to see my life through his lens and discover this life, this vocation He had called me to.”

As you’ve heard, the upcoming ordination of Deacon Paul Kallal is the culmination of years of study and service and a life that God created for him. We look forward to sharing a recording of the ordination event in the days following the ceremony in August, and we feel blessed that Deacon Paul will serve the community going forward by helping other young men find their paths.

If you see yourself in his story, we encourage you to learn more about becoming an Oblate or how to discern God’s will. 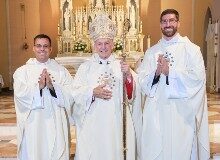 Sharing in Your Journeys

It’s our greatest joy to share in your journeys of faith, and we're only able to do this because of generous supporters like you. Let's keep making a difference in the spiritual journeys of God's people together.

3 comments on “The Path to Priestly Ordination: Reflections from an OMV Seminarian”

This book is a hopeful invitation to all who struggle to overcome the greatest obstacle in spiritual life: discouragement.