Venerable Bruno Lanteri founded the Oblates of the Virgin Mary religious order in Italy during a turbulent time in the Catholic Church.

Who Was Bruno Lanteri?

Father Bruno Lanteri was one of the most active priests in northern Italy in the Eighteenth century. He preached about the importance of retreats and wrote and edited books about his Spirituality. He spent hours and hours in the confessional and visited the poor and the sick. In the midst of all this, he always remained a man of deep contemplation and study.

What Inspired Such a Priestly Life? 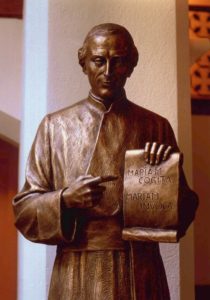 At the age of eighteen, young Bruno arrived in the city of Turin with the desire to become a priest. However, he found himself in difficult spiritual surroundings. The entire ecclesial life was permeated with Jansenism, a theological vision that presented God as a severe and intransigent judge. Bruno suffered a lot from that kind of religiosity until he experienced, under the guidance of Father Diessbach, the infinite Mercy of God. Lanteri experienced a true liberation of spirit and heart, and it became the center of his mission.

For the whole of Bruno Lanteri ’s life, he would announce, in every manner and to everybody, the infinite Mercy of the Father manifested in Jesus Christ. He did it in his preaching and his writings, especially through the sacrament of Reconciliation and spiritual direction. He would never let a person go without being comforted in hope and confidence in God.

“Wherever I travel throughout the Congregation (we are present in nine different countries of very different cultures), I see my Oblate confreres being very sensitive to that fundamental aspect of Fr. Lanteri’s message. In our parishes or sanctuaries, in the writings of the Oblates or in their personal encounter with people, one phrase constantly resounds: “God loves you!” May this word continue to give peace, hope and meaning to all the people who will come in contact with Fr. Lanteri and with the Oblates of the Virgin Mary.” — Fr. Patrice Veraquin, OMV, Rector Major Emeritus of the Oblates of the Virgin Mary

A growing group of friends of the Oblates of the Virgin Mary is working toward the canonization of Venerable Bruno Lanteri. Through his canonization, they hope to spread his message of God’s infinite mercy to even more people, accompanied by the hope, love and self-reflection that comes with knowing God on a personal level.

Get to Know the Guild