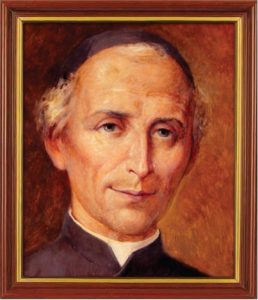 Two centuries ago, Venerable Pio Bruno Lanteri (1759-1830) served the Church in the Piedmont region of Northern Italy. It was a turbulent era both in secular society and in the Church. In the secular sphere, the anti-Christian spirit of the French Revolution was running rampant. Among those who continued to practice religion, the Jansenist heresy obscured the truth of God’s love, while other ideologies undermined the authority of the Pope.

It was in this context that the young Lanteri met the Jesuit priest, Father Nikolaus von Diessbach.  Under Diessbach, Lanteri made the Spiritual Exercises of St. Ignatius and had a profound experience of the infinite mercy of God. He became an ardent witness to God’s mercy through intense and varied apostolates as a diocesan priest in Turin. He preached the Spiritual Exercises and popular missions, offered spiritual direction and confession, circulated Catholic books, supported lay and priestly associations, and provided real care for the needy. In all this, he was always careful to guide people “to the truth in love,” showing the utmost goodness to all and trying to help everyone to seek genuine holiness. Lanteri always pointed to fidelity to the Church and fidelity to Mary as the certain guiding lights along the path of the Christian life.

Central to the apostolate of Father Lanteri was his collaboration with certain groups called the Amicizie Cristiane (Christian Friendships) and the Amicizie Sacerdotale (Priestly Friendships) founded by Father von Diessbach. The Amicizie were something new to the times. They were groups of lay people and priests committed to a serious spiritual life, and to making an impact on the culture by circulating Catholic books. Father Lanteri guided and accompanied these groups for no less than thirty years.

In 1814, three zealous priests came to Father Lanteri for guidance in forming a fraternity dedicated to preaching retreats and reviving the Church in the wake of the spiritual ravages of the French Revolution and the Napoleonic era. Father Lanteri entrusted the group to the Virgin Mary, whom he always called their Foundress and teacher. Despite some initial setbacks, the Oblates of the Virgin Mary were approved by Pope Leo XII on September 1, 1826.  Fr. Lanteri died four years later August 5, 1830.

Oblates of the Virgin Mary

The Oblates of the Virgin Mary quickly expanded throughout Italy and into France and Austria.  Following the missionary spirit of the Founder, the Oblates eventually established foreign missions in Brazil and Argentina, and recently in Nigeria and the Philippines.  After a surge in the number of vocations from North America in the 1970′s, the Oblates came to the United States and Canada.  They established the community in Boston on September 12, 1976, and opened the doors to Our Lady of Grace Seminary two years later. The U.S. Province has foundations today in Massachusetts, Illinois, California, and Colorado.