This quote, from Venerable Bruno Lanteri, is an encouraging word to all of us who are trying to do our best within the limitations, weaknesses and sinfulness that are a part of our person. 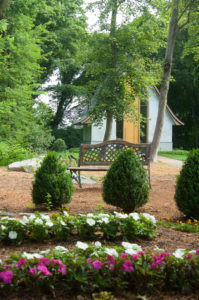 When it comes to our lives and those of others, we often focus on the things we do wrong. Seeing sins and mistakes can call us to question our own goodness and that of others and cause us to make judgments that are not true.

As important as it is to honestly face those areas of our life that need to be transformed and forgiven, we also cannot let them paralyze us. We need to get up quickly and try again – to try to be good, kind, generous and loving. The longer we stay down, the more difficult it is to get up. We have to get up again more and more quickly so that the grace of God’s forgiveness can affect our lives and those of others.

This same idea was a key aspect of the pastoral approach of the Founder of our community, Venerable Bruno Lanteri. In October of 2007, as a way to celebrate and honor Venerable Lanteri’s life, the Oblates of the Virgin Mary held a spiritual concert at St. Clement’s Eucharistic Shrine in Boston, Massachusetts, entitled Nunc Coepi.

What Does Nunc Coepi Mean?

The translation of Nunc Coepi is “now I begin.” These words are taken from Psalm 77:10 in the Vulgate, the Latin translation of the Bible, and it is a key phrase in the life and ministry of Venerable Lanteri. They provided the motivation for his ministry and capture the way in which he treated the souls who were entrusted to his care

Listen to the words and pronunciation in this video from Oblates around the world.

In a letter to a religious sister to whom he was giving spiritual direction, Fr. Lanteri expounds on what these words mean.

“Say with courage: Nunc Coepi – Now I Begin and walk always in the service of God. Do not keep stopping to look back, because he who looks back cannot hasten forward. Do not content yourself with beginning this year. Begin every day, because each day and for each hour of the day the Lord taught us to say in the ‘Our Father:’ Forgive us our trespasses. Give us this day our daily bread.  And do you not see that the enemy seeks to take away your tranquility and confidence in God, two dispositions so necessary for praying well?  Take there the counsel of St. Teresa, “Let nothing disturb you”, not even your spiritual miseries, because these are the object and the foundation of the infinite mercy of God, which surpasses the malice of all the sins of the world!” – Letter to Sister Leopolda Mortigliengo

This spiritual advice was revolutionary in the time of Fr. Lanteri, the late eighteenth and nineteenth century. It provided hope where hope was very often not found.

Learn more about praying with Lanteri and request prayers ›

The Impact of Nunc Coepi

According to a doctoral thesis written by Jean Gueber, S.J., Venerable Lanteri and his phrase Nunc Coepi, produced monumental effects for the good of Catholic France. Gueber cites a book written in 1832 by Abbé Gosset called Justification of the Moral Theology of St. Alphonsus Liguori. This work of Gosset, who later became a bishop and cardinal in France, became so well known and highly influential that it was taught in the seminaries. Within two years it marked a turning point in the pastoral approach of moral theology, particularly in preaching and in the sacrament of Confession. It brought moral encouragement and hope to the Christian who was trying to live a virtuous life, despite struggles, shortcomings and sinfulness.

To appreciate this work, it is important to understand the two hundred years that preceded it. The atmosphere of the Church in France was plagued by the disordered teaching of Jansenism, which emphasized the sinfulness, and human depravity of the person who was never good enough to approach the throne of grace to receive Holy Communion.

This background is important because the influence of Gosset’s work points back to one person, Venerable Bruno Lanteri. The hold that Jansenism had on the Catholic Church in France was reversed within a very short period of time. Father Lanteri, through his writing, preaching and example, prepared the way for the moral theology and spirituality of St. Alphonsus Liguori to take a lasting hold on the Catholic Church in France.

The pastoral approach of Venerable Lanteri was based on a moral theology which stressed the goodness of God and the infinite gift of his mercy. The sinner was not to be afraid to approach the throne of grace, but with confidence to seek solace in the God who desires to forgive us.

Venerable Lanteri’s pastoral approach and outlook is just as needed today as it was during his time. His example does not suggest we deny that we are sinners. Rather, his teaching gives us encouragement to get up quickly and trust in the mercy of God which gives us confidence to take the next good step. If we apply this understanding to ourselves as well to the others, we can transform the culture in which God has placed us.

“A saint is not someone who never sins but one who sins less and less frequently and gets up more and more quickly.” Ven. Bruno Lanteri

Venerable Lanteri taught the importance of these words by the example of his own life. We start first with ourselves and then reach out to others. It begins with practicing what he preached, “Nunc Coepi, Now I Begin.”

By Father Bill Brown, OMV, Former Provincial of the St. Ignatius Province of the Oblates of the Virgin Mary